To some, the Las Vegas Fremont Street Experience is the “real” Vegas. 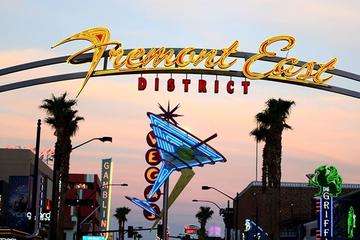 Living statues and street performers dressed like Kiss, Jack Skellington, or Bumblebee from Transformers. Male lap dancers – it’s an easy gig, all you need is a chiseled bod, a cowboy hat, and a folding chair. Captain America girls in body-paint bikinis posing for photos with awkward middle-aged men in polos and khaki shorts. An Elvis impersonator sitting next to a showgirl in full peacock-headdress, sipping water and texting as they cool their heels between gigs.

Buskers with acoustic guitars, steel drums, or pop-and-lock dance moves. 80’s cover bands on the stage. Songs by Foreigner and Vanilla Ice blaring at a million decibels. A stripper in pasties collecting tips in her nylons, half a block down from a bee lady handing out balloon animals to the kiddies.

It’s a madhouse. Fremont Street Experience resembles nothing so much as Venusville, the mutant red light district from the Schwarzenegger cheese-fest Total Recall.

High overhead, zip lines run the length of the cathedral-like canopy. This is the SlotZilla Zip Line attraction, nonsensically subtitled the “Neon High Club.” Every few minutes someone’s son or daughter goes flying down that zip line, arms outstretched, usually screaming a high-pitched “WOOOOOO!” Every hour on the hour, the canopy asserts itself with a dazzling, seizure-inducing kaleidoscopic light show, playing out over acres of LEDs directly above to the soothing strains of Heart.

In reviving one of Vegas’ oldest entertainment district, it was between this or a life-sized Starship Enterprise. Did they make the right call? Who’s to say. 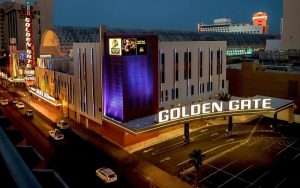 You’re walking on real history here. The five westernmost blocks of Freemont Street that make up the Experience saw the very first hotel in Las Vegas – the Hotel Nevada, first opened in 1906 and now the Golden Gate Hotel and Casino. This is where Vegas got its first telephone, its first paved street, its first highrise (the Fremont Hotel), its first casino gaming license and its first purpose-built casino. The grid-sucking trend of 24-hour neon lights started here – nicknamed “Glitter Gulch,” every promotional photo of Vegas sparkle was taken here until the Strip became ascendent in the 1990s.

So ditch the Strip and enjoy the hubbub. Ride the zip line ($20 for the lower zip line, $40 for the upper), then grab a massive slice of greasy pizza or BBQ from a food truck. Shop at high-end gift shops and organic beauty stores lit up like Christmas trees. Order an over-priced cocktail from one of the outdoor bars, if you can dodge the platform boots of the go-go girls dancing on said bars. Shout to be heard over Def Leppard songs blaring from on high. Toss some change or a ten into the cowboy hat of a chubby guy in a jock strap singing Hank Williams with accompanying guitar. People-watching doesn’t get any better than this, and America’s Playground doesn’t get more playful, more hands-on, or more chaotic than this.

VERDICT: Built from the dust of the original Vegas, the Las Vegas Fremont Street Experience is a rollicking mess of contradiction, tackiness, and pizzazz. In short, it is the real Vegas, in all her gussied-up glory. 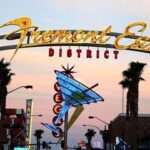 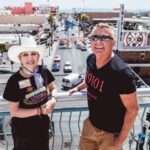 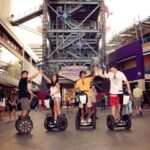 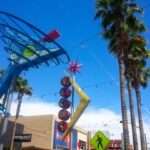 We are sorry you are leaving

From a full package to just a flight or a hotel
Vegas.com has it all.